Ah, it is the beginning of September when thoughts turn to going back to school, the days turn a little colder (in the northern hemisphere) and the smell of lawsuit briefs is in the air. Well, okay -- the latter might not be what you expect, but this is a special September, after all. Postponed from May, the deadline for filing comments in the Google Book Search settlement is coming up. And everyone is weighing in ("again" for some) on the details of the settlement. A couple of highlights.

The American Library Association (ALA), the Association of College and Research Libraries (ACRL) and the Association of Research Libraries (ARL) again offered its support for the settlement, if only the court would promise to extend vigorous oversight of pricing and privacy practices of Google and the Books Rights Registry. This came in the form of a supplemental filing to the brief the three organizations filed in May (just prior to the first comment deadline). 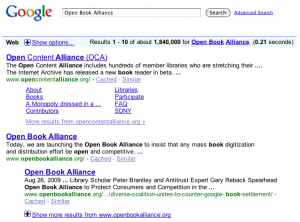 [/caption]An odd group of bedfellows has also gotten together to oppose the settlement. Called the "Open Book Alliance", it is made up of (at the moment): Amazon, the American Society of Journalists and Authors, the Council of Literary Magazines and Presses, the Internet Archive, Microsoft, the New York Library Association, the Small Press Distribution, the Special Libraries Association, and Yahoo!. Sound vaguely familiar? That's understandable; if you match up the interested parties of the OBA with the OCA (the Open Content Alliance), you'll find Microsoft, the Internet Archive, and Yahoo in common. A search for "Open Book Alliance" in Google, in fact, still brings up the "Open Content Alliance" as the top hit. The biggest new party, Amazon, to the formation of this group (or reconstitution, if you will) is undoubtedly the inspiration behind a press release from the Authors Guild (a party in the settlement agreement) with a biting title: Amazon Accuses Someone Else of Monopolizing Bookselling.

Lest you think the fun be over too soon, the deadline for filing briefs has been extended yet again from close of business tomorrow (Friday, September 4th, 2009) until 10:00am Tuesday. Apparently, the court's electronic filing system will be unavailable from 2pm today until 8am on Tuesday the 8th. The main settlement website says explicitly that the deadline for rights holders to opt out of the settlement remains September 4th.

But seriously, if you are looking for thoughtful commentary on the commentary, I recommend James Grimmelmann's blog, The Laboratorium. Although there isn't a single page that brings together all of his postings about the Google Book Search settlement, he helpfully prepends "GBS:" to the title of all such postings. If you are looking to participate in the discussion surrounding the settlement, the best place I know of is the interactive version of the settlement notice hosted at The Public Index. There you can comment and watch the comments of others on a section-by-section basis, along with a catalog of documents and links from others regarding the settlement.

The next big event after the filing deadline is the Final Fairness Hearing, scheduled for 10am on October 7, 2009 (or, at least, scheduled for that day and time at the moment). At the fairness hearing, we get to hear from the the court as it considers whether to grant final approval of the Settlement. Somehow, though, I don't think even that will be close to the final word on the settlement. Stay tuned...

The text was modified to update a link from http://www.wo.ala.org/districtdispatch/wp-content/uploads/2009/09/supplementbrief-FINAL.pdf to http://wo.ala.org/gbs/ala-acrl-arl-brief-to-court/ on January 20th, 2011.

The text was modified to update a link from http://www.wo.ala.org/districtdispatch/?p=3579 to http://www.districtdispatch.org/2009/09/library-associations-submit-supplemental-filing-call-for-increased-oversight-of-google-agreement/ on August 22nd, 2013.

The text was modified to remove a link to http://thepublicindex.org/documents on August 22nd, 2013.