Back in the early days of this blog, I had a post on Buzzwords Galore and Bandwidth that May Rival Your Station Wagon. The topic was a "hybrid optical and packet network" being deployed by Internet2 in 2006, and in the tail end of the post text I explained the reference to the station wagon part of the post title:

When you think you have a really zippy network connection, someone will (should?) bring up an old internet adage which says “Never underestimate the bandwidth of a station wagon full of tapes.”

In the post comments, Walt Crawford asked "How about a 747 full of BluRay discs?" I must have been bored, because I calculated that bandwidth as 37Tb/s, and I even showed my work. Last week an internet citizen going by the name "Steveo" updated the table for an Airbus A38-800F. He (or she) and I arrived at different numbers (Steveo seems to have mistaken cubic feet for cubic meters in the calculation and didn't update the maximum airspeed figure), so perhaps it is time to revisit this topic. (And while we're at it, we'll throw in numbers for Boeing's latest freighter aircraft: the 747-8F.) 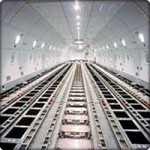 [/caption]As with the first post, this of course assumes a negligible time to load and unload said Boeing 747-400, no airport congestion, a frictionless plane and a perfect spherical earth, along with several other typical assumptions from the world of physics. It also assumes that your can fit rectangular-shaped cartons in a cargo space that is clearly curved while still maximizing space. Check my math and let me know if I made a mistake.

Now, by contrast, the latest notice I could find of high-speed data transfer over a network was a mention in December last year. In a press release from Caltech with the title "High Energy Physicists Set New Record for Network Data Transfer" is this paragraph:

The focus of the exhibit was the [High Energy Physics] team's record-breaking demonstration of storage-to-storage data transfer over wide area networks from two racks of servers and a network switch-router on the exhibit floor [of SuperComputing 2009 in Portland, Oregon]. The high-energy physics team's demonstration, "Moving Towards Terabit/Sec Transfers of Scientific Datasets: The LHC Challenge," achieved a bidirectional peak throughput of 119 gigabits per second (Gbps) and a data flow of more than 110 Gbps that could be sustained indefinitely among clusters of servers on the show floor and at Caltech, Michigan, San Diego, Florida, Fermilab, Brookhaven, CERN, Brazil, Korea, and Estonia.

So, 110 Gbps from a network and 217,648 Gbps from a Boeing 747-8 Freighter. (We're not counting yet the capacity of the theoretical Airbus A380-800F.) Only three orders of magnitude before the proverbial station wagon full of tapes is put to rest.

10-Jun-2010. If you have read this far, be sure to check out "Bandwidth of Large Airplanes, Take 2" by Walt Crawford. He takes on the points of 100-disc spindles, 2TB hard drives, and whether weight is a limiting factor in this scheme. Thanks, Walt!

The text was modified to remove a link to http://www.aerospace-technology.com/projects/airbus_a380/specs.html on December 4th, 2012.

Thoughts on Growing Up

It ‘tis the season for graduations, and this year my nephew is graduating from high school. My sister-in-law created a memory book—”a surprise Book of Advice...

Over the weekend, I posted an article here about pre-recording conference talks and sent a tweet about the idea on Monday. I hoped to generate discussion abo...

Should All Conference Talks be Pre-recorded?

The Code4Lib conference was last week. That meeting used all pre-recorded talks, and we saw the benefits of pre-recording for attendees, presenters, and con...

Earlier this month, my Twitter timeline lit up with mentions of a half-day webinar called Cybersecurity Landscape - Protecting the Scholarly Infrastructure. ...