It might have been the week of the annual American Library Association meeting with all the news and announcements and programming that came from it -- as well as getting into the dog days of summer -- but interesting news at the intersection of technology and libraries did not take a pause. Google made a big splash this week with tantalizing tidbits about its new social media project; it is at a look-but-don't-touch stage, but the look is enticing. Then there were two articles about really big data -- what is produced in the high energy physics supercolider at CERN and what we produce as a society. And to go along with that data we produce as a society is another warning that much of it isn't safe from the prying eyes of the USA PATRIOT Act. Finally, we revisit the Georgia State University copyright case with a comment on the potential chilling impacts on free speech.

Feel free to send this to others you think might be interested in the topics. If you find these threads interesting and useful, you might want to add the Thursday Threads RSS Feed to your feed reader or subscribe to e-mail delivery using the form to the right. If you would like a more raw and immediate version of these types of stories, watch my FriendFeed stream (or subscribe to its feed in your feed reader). Comments and tips, as always, are welcome.

Today, the connections between people increasingly happen online. Yet the subtlety and substance of real-world interactions are lost in the rigidness of our online tools.

In this basic, human way, online sharing is awkward. Even broken. And we aim to fix it.

We’d like to bring the nuance and richness of real-life sharing to software. We want to make Google better by including you, your relationships, and your interests. And so begins the Google+ project. 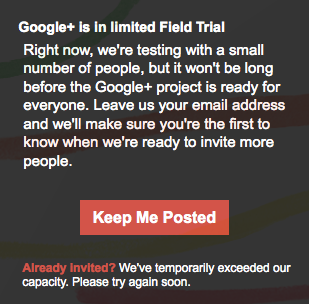 [/caption]This week Google unveiled its latest plan for entering the social networking space. Called "Google+", it is less a product and more of a series of services that will tie together existing Google products with new social binding tools. At the heart of the binding tools seems to be "Circles" -- or the ability to create different social networks for the various kinds of social interactions one has in real life. This sort of social segmentation is possible with Facebook "groups", but the introductory video and the online help make the point about how Circles is baked into the Google+ social networking structure. There are other tools in the announcement, too, like a video "hangout" space, "sparks" for surfacing threads of conversations, and ways for groups to "huddle" in a chat session.

Google+ is in very limited public roll-out at the moment. Some are speculating that this is a marketing strategy to build buzz around the project like they did with limited invites to GMail and Google Voice. I wonder, based on the "We've temporarily exceeded our capacity. Please try again soon" message on the signup page, whether they are having difficulties scaling up the service. In any case, they are taking measured and deliberate steps in rolling this out. If you want to learn more, there are about seven minutes of videos on the Google+ Project Overview page. Beyond that is an excellent 6,300-word article by Steven Levy on Wired.com; Steven has had inside access to the development of the project for months and there are a lot of insights in the article that I'm not seeing published elsewhere.

The Size of Big Data

Experiments at CERN are generating an entire petabyte of data every second as particles fired around the Large Hadron Collider (LHC) at velocities approaching the speed of light are smashed together. However, Francois Briard, control infrastructure section leader, beam department, explained that CERN doesn’t capture and save all of this data, instead using filters to save only the results of the collisions that are of interest to scientist at the facility....

This still means CERN is storing 25PB of data every year – the same as 1,000 years' worth of DVD quality video – which can then be analysed and interrogated by scientists looking for clues to the structure and make-up of the universe.

- CERN experiments generating one petabyte of data every second, by Dan Worth, IT News from V3.co.uk

In 2011 alone, 1.8 zettabytes (or 1.8 trillion gigabytes) of data will be created, the equivalent to every U.S. citizen writing 3 tweets per minute for 26,976 years. And over the next decade, the number of servers managing the world's data stores will grow by ten times. Interestingly, the amount of data people create by writing email messages, taking photos, and downloading music and movies is minuscule compared to the amount of data being created about them, the EMC-sponsored study found.

The IDC study predicts that overall data will grow by 50 times by 2020, driven in large part by more embedded systems such as sensors in clothing, medical devices and structures like buildings and bridges.

- World's data will grow by 50X in next decade, IDC study predicts, by Lucas Mearian, ComputerWorld

These two reality checks came by way of ACM TechNews. Just in case you think you were dealing with some big hunks of data, just know that data in the library world is pretty miniscule. Now there are some that are having to deal with this sort of "big data" -- particularly with regards to the new rules from the National Science Foundation.

At the Office 365 launch, Gordon Frazer, managing director of Microsoft UK, gave the first admission that cloud data — regardless of where it is in the world — is not protected against the USA PATRIOT Act... After a year of researching the Patriot Act’s breadth and ability to access data held within protected EU boundaries, Microsoft finally and openly admitted it...
Frazer explained that, as Microsoft is a U.S.-headquartered company, it has to comply with local laws (the United States, as well as any other location where one of its subsidiary companies is based).

This was a bit unexpected. If you are a U.S.-based entity and thought your data was safe from revealing through a U.S. National Security Letter because you were using a hosting service outside of the U.S., you may want to check with your lawyers again.

Closing the book on academic freedom

The scope of the proposed injunction in the [Georgia State University] litigation goes far beyond existing case law, as it limits all speech, by all actors, in any way associated with GSU. As such, it is not a limit on a particular instance of suspected infringement, but a limit on all potential speech going forward. Prior injunctions have been limited in scope and have stopped the publication of existing works; the proposed injunction chills all future expression coming out of GSU, and leaves no space for the comment, criticism, and dialogue that lies at the center of constitutionally protected speech. In order to open up a new business model, the plaintiffs ask the court to shake the foundations of the balance between incentive and expression; and the price of doing so is simply too high.

- Closing the book on academic freedom, by Bobby Glushko on Paul Courant’s blog

Bobby Glushko, J.D., is the Associate Librarian in the Copyright Office of the University of Michigan Library. Following up the frightening scenario in a DLTJ Thursday Thread earlier this month, Mr. Glushko looks at the potential impact on First Amendment free speech if the litigation in the Georgia State University case goes in favor of the plaintiffs. It is a whole new level of frightening.