Another slow Thursday Threads week due to higher priority work duties taking precedent over scanning for trends. This week has a look at the explosion of video content uploaded to YouTube (which dovetails nicely with the Thursday Threads report two weeks ago about the record amount of internet traffic attributed to Google's services), why the distinction between 'digital natives' and 'digital immigrants' should be dropped, how telecomm companies want a piece of the credit card business, and the movement of Momento to an Internet Draft. If you find these interesting and useful, you might want to add the Thursday Threads RSS Feed to your feed reader or subscribe to e-mail delivery using the form to the right. If you would like a more raw and immediate version of these types of stories, watch my FriendFeed stream (or subscribe to its feed in your feed reader). Comments and tips, as always, are welcome. 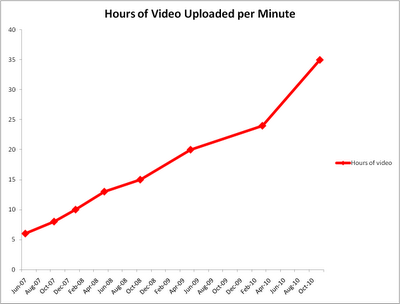 Over 35 Hours of Video Uploaded Every Minute to YouTube

Google reported this last week, and it is a scale of data that is very hard to imagine. Via Jason Griffey.

The Digital Natives / Digital Immigrants Distinction Is Dead, Or At Least Dying

Quite a lot has been written about how this [distinction between digital natives vs. digital immigrants] isn’t really substantiated. At the very least, the distinction is quickly growing irrelevant. Unfortunately, the idea is still uncritically accepted even in some journal articles, and perhaps used as an excuse or crutch too often for poor or ineffective teaching practices. The result may be a self-fulfilling prophecy, but for teachers, not students. We currently teach pre-service and in-service teachers less technology skills than we do middle schoolers and high schoolers, perhaps because of an implicit belief that adults can’t handle anything more than powerpoint or a basic HTML page.

Although this article focuses on primary and secondary education, I wonder if the same could also be said about "digital immigrant" librarians? Via Dorothea Salo.

Verizon, AT&T and T-Mobile have joined forces to build a mobile commercial payment network that will let customers use smartphones as credit cards. Dubbed Isis, the proposed system will use near-field communication technology to send encrypted data from smartphones to payment processors. The system will only be able to send payments over a short distance and the carriers say it is "being designed and built to include strong security and privacy safeguards." The carriers expect that Isis will come online within 18 months.

When the big telecommunications companies come together and agree to do something, you have to know it is going to be big. In this case, the article describes a system to use your cell phone as a payment device. If they can keep it together, the next phone you buy may include this functionality.

"Memento" Submitted to IETF For Consideration as an RFC

The HTTP-based Memento framework bridges the present and past Web by interlinking current resources with resources that encapsulate their past. It facilitates obtaining representations of prior states of a resource, available from archival resources in Web archives or version resources in content management systems, by leveraging the resource's URI and a preferred datetime. To this end, the framework introduces datetime negotiation (a variation on content negotiation), and new Relation Types for the HTTP Link header aimed at interlinking resources with their archival/version resources. It also introduces an approach to discover and serialize a list of resources known to a server, each of which provides access to a representation of a prior state of a same resource.

This last one is clearly for the techies in the Thursday Threads crowd. The official title is "HTTP framework for time-based access to resource states" and it is a way for a web browser to negotiate for a previous version of a web page. One way to think about it would be as an automated way to see previous versions of a wiki page. Or another way would be to see past versions of a page in the Google web index cache or in the Internet Archive Wayback machine. This submission to the Internet Engineering Task Force (IETF) is the first step in making this function a reality, so for now just know that this posibility may be comming and keep an ear out for other mentions of Momento.