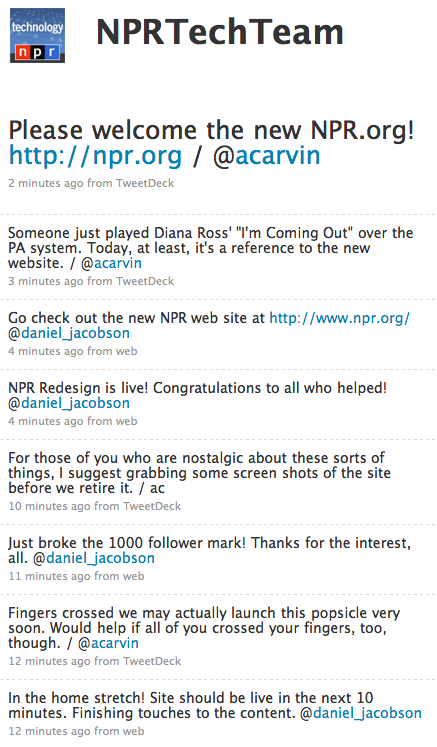 [/caption]All day today, the staff at NPR's Digital Media team have been preparing to launch a new version of their website, and we've been able to follow along via tweets on the NPRTechTeam Twitter account. It looks like it was a marathon 11-hour effort, but in the course of doing so two members of the team -- Andy Carvin (acarvin on Twitter) and Daniel Jacobson (daniel_jacobson on Twitter) -- have been posting regular updates. Clearly the two of them are sharing the NPRTechTeam Twitter account, and just as clear is who is doing the tweeting. Each of them use either their initials or (more commonly) their Twitter user IDs to sign each tweet. As compared to my recent post about Clinical Reader's practices, this is a much cleaner approach and inspires confidence in the content being portrayed.

The new NPR site is now live. Kudos to the team for bringing the new site to its opening, and in doing so showing good practices for shared Twitter accounts.