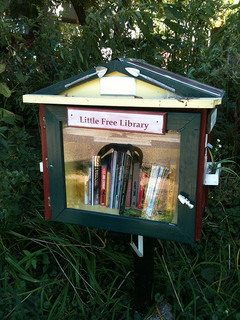 [/caption]There are these places popping up around the country where people are putting out books in containers ranging from little huts to hutches to converted fire extinguisher cases for others to take, share, and return or substitute with a book of their own. In some cases, they are even replacing closed library branches. But in all of their variations and in much of the media discussion about them, something seemed odd in how they were described -- are they really libraries?

Many of the stories describing these oases seem to focus on the books themselves -- that the container is a place one goes to give or find a physical artifact. As librarians would tell you, a 'library' is so much more than that. Libraries are less about the physical artifacts and more about the connections made with people and between people and ideas. It is just that libraries have been focused on the lending of physical artifacts for so long that they have become synonymous. Particularly as we now start the era of ideas encoded in digital form and many begin to wonder what will become of that place called the 'library' as the predominance of the physical form declines.

So as I came across the first few articles describing the 'little free library' movement and similar efforts, I was bothered by the fact that the word 'library' kept being used to describe these containers. I changed my mind as I read one story with the title Using books to build community. Part of a supplement to an NBC Nightly News story, the article says:

And each one has become more than just a place for getting books and leaving books. [Todd] Bol said the little libraries have fostered a greater sense of community.

“There’s a primal need,” he said, “for people to be a part of their community. We have people tell us all the time in seven days of having a Little Free Library I’ve met more people than I have met in 20 years in my neighborhood.”

In Madison, Wisc., Meghan Blake-Horst put a little library in her front yard. "It's a continual conversation piece," she said.

Terri Connolly Cronk, who also lives in Madison, said people in the neighborhood who never stopped and talked before are stopping now because of the library that rests on the corner of her property. The library is not just encouraging readers, it's giving neighbors opportunities to get to know each other.

The text was modified to remove a link to http://www.freep.com/article/20120413/NEWS01/204130362/Outdoor-libraries-start-leading-books-at-closed-branches?odyssey=mod%7Cnewswell%7Ctext%7CFRONTPAGE%7Cs on November 1st, 2012.