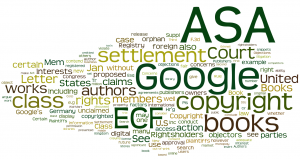 [/caption]This afternoon, Judge Denny Chin released the opinion of the court rejecting the proposed settlement agreement between authors/publishers and Google in the Google Book Search settlement. ARL's Public Policy Twitter account seems to have been the first to break the news. It is 48 pages long (probably about 30 if you don't read the footnotes and legal citations) and very readable. The heart of the matter begins on page 18:

As a preliminary matter, I conclude that most of the [legal] factors favor approval of the settlement. The ASA [Amended Settlement Agreement] was the product of arm's length negotiations between experienced, capable counsel, with assistance from DOJ [Department of Justice]. Further litigation would be complex, expensive, and time-consuming. Although the parties have conducted only limited discovery, the case has been pending for some years. The legal and factual issues are complex, and there is a risk that if plaintiffs were to proceed to trial, they would be unable to establish liability or prove damages. As discussed further below, substantial questions exist as to whether the case could be maintained as a class action, in its present form, through trial. In light of the attendant risks, the financial aspects of the ASA fall well within the range of reasonableness.

Only two of the [legal] factors weigh against approval of the settlement: the reaction of the class and defendant's ability to withstand judgment. As for the latter, there is no real risk that a judgment following trial would render Google insolvent, and thus the avoidance of insolvency is not an issue. The former, however, is important. Not only are the objections great in number, some of the concerns are significant. Further, an extremely high number of class members -- some 6800 -- opted out. ... I turn to the objections now.

An Associated Press story in the Washington Post published shortly after the opinion was release includes a comment from Google's lawyers:

“Like many others, we believe this agreement has the potential to open up access to millions of books that are currently hard to find in the U.S. today,” Ware said in a statement. “Regardless of the outcome, we’ll continue to work to make more of the world’s books discoverable online through Google Books and Google eBooks.”

To follow the discussion, look for the #GBS hashtag on Twitter, and in particular follow James Grimmelmann of New York Law School on Twitter and his blog along with a project he is supervising, The Public Index and its blog. Also watch the wisdom-of-the-crowds at the paper.li #GBS hashtag newspaper, which is updated daily and aggregates the links published to #GBS tweets.

The text was modified to remove a link to http://www.washingtonpost.com/nyc-judge-concludes-google-book-settlement-not-fair-adequate-and-reasonable/2011/03/22/ABG2DuDB_story.html on July 13th, 2011.