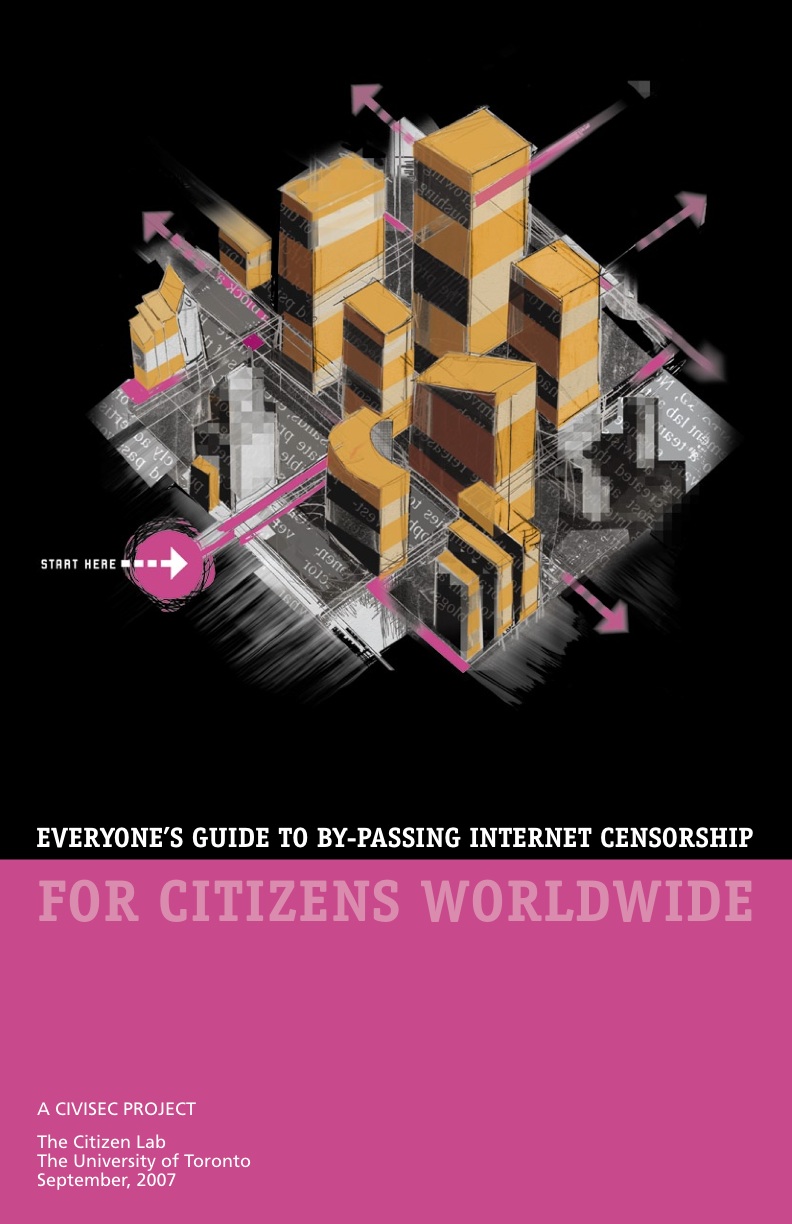 The title of this post is the same as the report it describes, Everyone's Guide to By-Passing Internet Censorship for Citizens Worldwide [PDF]. It was announced by Ronald Deibert last week on his blog at Citizen Lab. The one sentence synopsis goes like this: "This guide is meant to introduce non-technical users to Internet censorship circumvention technologies, and help them choose which of them best suits their circumstances and needs."

Although the stated audience is non-technical users, I found the description of techniques and circumstances under which one might deploy the techniques very interesting. The document provides guidance for those seeking circumvention and those who want to provide it. After a brief introduction to censorship activities worldwide (including in the United States), it walks the reader through an analysis of needs and describes solutions that meet the needs based on the user's technical skills. I knew 'tor' -- a long-time favorite of mine -- would be in there, but I was surprised by the range of other options.

To put a library spin on the report, some of the solutions offered are usable on "public computers" -- such as, say, what one might find in a library. One could take the report and read about the techniques with the intent to block them on your public workstations, but I think another reading of it would say that such attempts are ultimately futile because of the likelihood of other similar services popping up to take their place. Unless you are running a white-list-only setup (that is to say, your public workstations are explicitly set to only allow access to a prescribed set of sites), any user can walk up to any public workstation and access the circumvention sites described in the report or any other ones that spring into existence.

The circumvention techniques are, of course, do not provide an assurance of privacy. Even though the network traffic is encrypted, the activities of the user can still be monitored by keystroke loggers and other techniques in the workstation itself. In order to get around that, one would need to restart the public workstation with a bootable Linux distribution, but that is perhaps a report for another time...

The text was modified to update a link from http://deibert.citizenlab.org/Circ_guide.pdf to http://www.nartv.org/mirror/circ_guide.pdf on January 28th, 2011.

The text was modified to update a link from http://deibert.citizenlab.org/Circ_guide.pdf to http://www.nartv.org/mirror/circ_guide.pdf on January 28th, 2011.

The text was modified to remove a link to http://www.tech-faq.com/bootable-linux-distributions.shtml on January 28th, 2011.