The American Library Association annual conference is getting more social each year, and as a long-time member of ALA and often a critic of the, well, un-togetherness of ALA's electronic capabilities, it is nice to see the trend continuing this year. Take, for instance, the Blogger's Room. Initially just a LITA thing, it is now being promoted as an association-wide service. As I write this, that page has about two dozen entries for individual and group blogs that say they will be covering conference events.

Or take Brian Eisley's unofficial Twitter reflector. (Brian calls it a group; I'm calling it a reflector; it is something different than a Twitter Hashtag.) He has put up some instructions on how to get signed up to receive and how to sent messages to the reflector. There is also the Twitter hashtag #ala08. I'm a Twitter newb, so I don't know the differences, advantages, and disadvantages of each. But I'm interested to learn...

Speaking of tags, the ALA Annual Wiki defines ala2008 as the official conference tag. That's not such a stretch to assume -- it is a logical choice -- but the establishment of an "official tag" (as much as anything is official in the social tagging space) does help collocate meeting content in the blogosphere, in Flickr, and in del.icio.us. (What?!? ...you say? That's the function of subject analysis and description? Here in the unwashed folksonomy space? Blasphemy!) 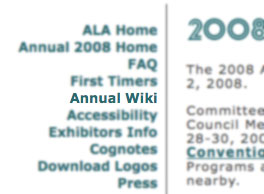 Did I mention the Official ALA Annual Wiki? It is now getting prominent placement in the navigation area of the primary conference pages. The fifth link down -- pretty impressive. And it is easy to see why. The Official Wiki holds a host of information not previously found in the American Libraries insert or even on-site. Links to policies and procedures, a Google map of area restaurants and hotels, an "Unofficial Events" page, and a Conference Presentation Materials site to put all of the PowerPoints and handouts from meetings.

It is nice to see ALA providing this space where grassroots organization and promotional efforts can be shepherded in on co-located space. There was a time that this was spread out over various hand-coded web pages, blogs and other web services. Way to go, ALA; and way to go ALA members!

The text was modified to remove a link to http://www.brianeisley.com/TwitterALA2008/ on January 28th, 2011.

The text was modified to remove a link to http://www.ala.org/ala/eventsandconferencesb/annual/2008a/home.cfm on November 13th, 2012.

The text was modified to remove a link to http://www.presentations.ala.org/index.php?title=Main_Page#2008_Annual_Conference on August 22nd, 2013.